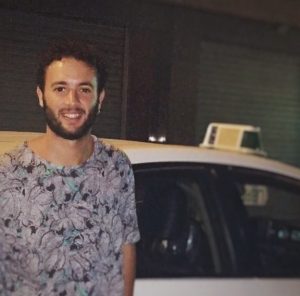 “I was living in London because my friend had a clothing shop there. He said, ‘Come and work with me,’ and I thought it would be a good way to practice my English. But it cost a lot to live, and we were sharing a room in a bad neighborhood for much more than what I pay here. It was a good experience, but I didn’t like it there. There was no sun and the food was terrible. Here, you have the city and the mountains and the beach all in the same spot. What could be better? When I was still living in London, one time I came back for three days to visit at Christmas. My dad picked me up, and my mom and all my friends didn’t know I was coming. When I walked in, it was a complete surprise, and my mom started to cry. It was euphoric. I’ve never had another moment like that one.”

While Valencia served as my home base during my month in Spain, I took several weekend trips to explore other cities. A train trip to Granada unexpectedly became a bus trip when there was something blocking the tracks and causing a delay. (Perhaps a cow, or a car, or something else entirely – my Spanish was still rather rusty at that point.) As the bus rumbled to a stop in Granada, I climbed into the second taxi cab in the line-up, and Juan Fran was my driver. Between his English and my Spanish, we cobbled together a conversation on the way to my hotel and he gave me his card with a cheerful offer for a cup of coffee while I was in town. You know those people who possess an infectious, welcoming energy that makes you feel like a long-time friend? That’s Juan Fran.

A Moment with Juan Fran

After weaving through the late night crowd to get a must-have treat in Granada (a rectangle of hard ice cream inserted rather unceremoniously into a cone), Juan Fran’s taxi navigated us up the narrow, winding streets of the city to a little-known perch nestled in the mountains. There you’ll find a stone wall hugging the hillside where lucky explorers are rewarded with a spectacular view of the Alhambra; it’s one of those elusive non-touristy spots that seasoned travelers often seek and rarely find. We claimed a niche on the wall, legs dangling and ice cream dripping. As the quiet murmurs of other conversations wafted into the black night air, Juan Fran shared stories about the vintage motorcycle his dad passed on to him and his affection for Granada. I licked the ice cream from my fingers and realized: this is why I travel.