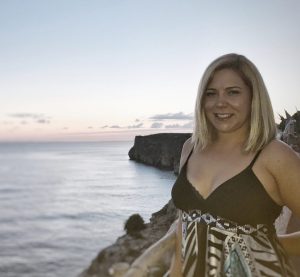 “My grandma was 92 and had lived this amazing life. She was in the underground national army and was awarded all these medals of honor. As I got older, I would travel to Poland once a year to see her, but since my time was limited, I didn’t want to spend all of my vacation in just one place. My family is pretty large so I always had many other people to see, plus new places I wanted to visit, so I never really got more than three or four days with her before I had to leave again. Every trip, I told myself I’d take the time to sit down and listen to her story. My brother and I even talked about turning it into a book. But the years kept passing and I just never did.

When I was in my 20s, I found out my job as a controller was ending and I decided to go to Poland again, but this time to live there and spend more time with my grandma. I was making plans to move when my old boss called and offered me a job that seemed too good to pass up. But to be honest, the real reason I stayed was because I met a guy. Eventually I realized I was just going through the motions. I was killing myself at work, miserable, and for what?

Then my grandma got sick and had emergency surgery. I asked my boss for unpaid leave to go and take care of her while she recovered, and he approved it. I stayed long enough to finish up some projects at work, because I thought, ‘What’s two more days?’

I arrived in Poland late at night, and when I went to the hospital the next morning, they said, “Did you come to say your goodbyes?” Everything had changed. Her body was there, but she wasn’t there anymore. I was too late. I spent the next two hours holding her hand, praying, saying the rosary with her sister, talking to her. For that whole two hours, I kept looking for a sign that she could hear me, but nothing. It’s my biggest regret – something that will hurt me forever probably.

I lost my passion for work at that moment. Something inside of me changed. I applied to school in Poland and the same week I got my acceptance letter was the week I got a big bonus pay-out from my job. Talk about perfect timing. They say God always gives us what we need. So I quit, sold all my stuff, and moved there. None of it happened how I planned, but I still found a way to accomplish what I always wanted to do.”

I met Magda through the language school where I took Spanish classes in Valencia. As we left class together on my first day, chatting about our travels and our families, talk turned to her journey from the corporate world to life on the road. I was deeply moved by the story she shared about her grandmother, and as it turns out, that was the first of many stories we would share.

A Moment with Magda

One evening I met Magda on the beach and we strolled to a little Italian restaurant in Cabanyal, the hipster neighborhood I called home during my time in Spain. As we settled in and perused the menu (lasagna for her, spaghetti for me), the waiter came to take our drink order and I asked for vino tinto – red wine. I rarely drink, but Spanish wine is cheap, prolific, and incredibly delicious, so “vino tinto” quickly became a staple phrase in my slowly expanding vocabulary. Magda looked at me with a grin and said, “How about a pitcher of sangria?” As the sky grew dusky outside and the street lights flickered on, we chatted about class, weekend plans, and boys, lulled into a happy haze by pasta and the magic they infuse into every batch of sangria in Spain. I thought to myself, “Isn’t it lovely to have someone in your life who can always convince you to get the pitcher of sangria?”