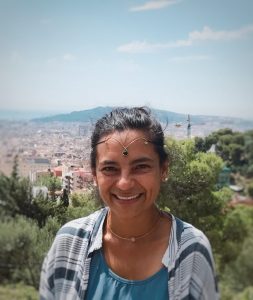 “I lived in New York for a while with one of my friends, and everyone was so kind there. It was such a beautiful place to me because there were people from all over the world, and each person I met was so friendly and welcoming. You could be who you wanted to be. I had to come back here because my visa only lasted for three months, but I will always remember that time with happiness.

When I was in Peru, I took the plant ayahuasca, and it changed how I look at things. Ever since then, I have been going on a journey. There is a place there with designs carved in the ground that you can see from the air – bears, trees, and other pictures. It seems impossible that they can exist. Some of my jewelry is inspired by that because it seems like magic. I come from Colombia, but I was in India for many years, where I learned about all the different stones and their meanings. I believe the same thing about jewelry that I believe about life: simple is best.”

On my last morning in Barcelona, I hiked my way up the steep hills at the edge of the city in search of solitude and reflection at Parque Güell. The park offers respite from the clang and bustle of a metropolitan city, with architectural delights and breathtaking landscapes blending seamlessly in an ever-present reminder of the talents of both God and man. Legs aching and mind cleared after reaching the summit, I stumbled back down the earthen trails, passing street vendors hawking Spanish flags, plastic whistles, and Picasso keychains. I rounded a corner and there was Luz standing quietly, hands folded, eyes shining. At her feet was a rough, woven blanket arrayed with simply hewn pieces of onyx, amethyst, and quartz wrapped in thin fingers of coppery gold.

There were a million reasons to keep walking: I rarely wear jewelry, and I have a self-imposed “no souvenirs” rule, preferring to collect moments and memories instead of things. But there was something about this woman – an other-worldly warmth, an unobtrusive presence – that gave me pause. Our eyes met, and there was a glint of knowingness, a sensation that says for the briefest of moments, “There’s something for you here.”

A Moment with Luz

We knelt next to each other on the hot stone path, her hands moving deliberately over the jewelry as she sought the one she knew belonged to me. Each piece contained a story, an intention meant for the wearer alone. I found myself marveling that out of all the long and winding paths sprawling across Parque Güell, somehow I had chosen this one. She held up a simple bronze band clasping two milky amethysts, and her words bent themselves around me with the same deftness as her gentle fingers. She spoke softly as she gave the bracelet a home on my unadorned wrist, telling me of the people and landscapes and heartbreaks that lent her the sense of purpose now guiding her days. Her hands stilled for a moment. She fixed me with a clear gaze as she said simply, knowingly: “You are finding your path too.” And so I am.